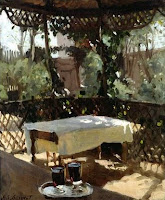 “Outside the leaves on the trees constricted slightly; they were the deep done green of the beginning of autumn. It was a Sunday in September. There would only be four. The clouds were high and the swallows would be here for another month or so before they left for the south before they returned again next summer.”

Notes: The painting is titled "Wineglasses" and it's an early study by the American artist John Singer Sargent, considered "the leading portrait artist of his generation". / Have a nice September! (Here, at last.)
at September 01, 2018