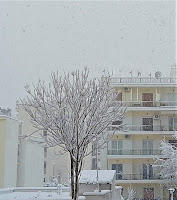 Small, red, and upright he waited,

in one hand and touching a lucky penny inside his coat pocket with the other,

while the first snows of winter

all trace of the world.” 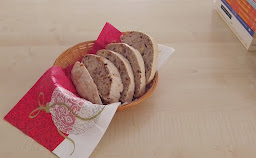 The Italians have panetone, the Germans stollen, the French both berawecka (pompe à huile) and the coquille de Noël, and the English the Christmas pudding – all sweet doughs with fillings of many fruits (glazed, candied or dried) diced. We, in Greece, have something quite different – a bread with a very distinctive taste, neither sweet nor savoury. The late Evi Voutsina, an acclaimed food reporter, cook and gourmand herself who wrote for Gastronomos magazine, loved it for its multi-layered texture of deliciousness, the robust taste of sourdough and the Christmas symbolism of its ingredients – warmth, mental power, well-being, rejuvenation.

So, this Christmas have some slices of the sourdough walnut bread especially for "...our loved ones, for all those who work, for the homeless of the world, for the soldiers who fight..."

Note: The blueish sentence in italics is bits and pieces drawn from the "Valse de Noel" or "A Waltz for Christmas" – the book (a joyful song, actually) Boris Vian wrote in 1955 for children and which, Natalie Choux , artist of many media, illustrated in 2O17. 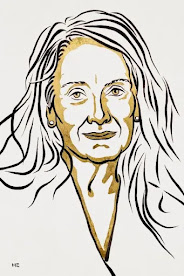 ...did not come as a surprise. Annie Ernaux, writer and professor of literature, was among the Top 5 writers to get the  2022 Nobel Prize in Literature, according to the bookies' odds. On 6th October, she finally did. For "...the courage and clinical acuity with which she uncovers the roots, estrangements and collective restraints of personal memory."
This is  a, nonetheless, non-comformist choice as the ones the Swedish Academy prefers – the way Ernaux reconstructs the past is extraordinary not only in its use of language but also, in the way her works link to sociology and its pioneering genre that was beyond its time.  It is also a wide nod to the world, a nod in favour of women and their right to their bodies – first, USAwards and then towards Iran. As a symbolism, this prize aims against obscurantism and all sorts of authoritarianism –of both individual attitudes and regimes–, in an insightful manner.
A very dynamic choice, indeed. A key hint to designate the reality of current affairs. If you haven't read any of her books yet, please do – they're worth every minute of your time.
Notes: Two years ago, I wrote about her book "A man's place". / You can watch the committee announcement here. The portrait of the French laureate is by Niklas Elmehed,  the official artist for the Swedish Academy Laureates Portraits.
at October 12, 2022 No comments:

Sitting between the sea and the buildings

He enjoyed painting the sea’s portrait.

But just as children imagine a prayer

Is merely silence, he expected his subject

To rush up the sand, and, seizing a brush,

Plaster its own portrait on the canvas.

So there was never any paint on his canvas

Until the people who lived in the buildings

Put him to work: “Try using the brush

As a means to an end. Select, for a portrait,

Something less angry and large, and more subject

To a painter’s moods, or, perhaps, to a prayer.”

How could he explain to them his prayer

He chose his wife for a new subject,

As if, forgetting itself, the portrait

Had expressed itself without a brush.

Slightly encouraged, he dipped his brush

In the sea, murmuring a heartfelt prayer:

“My soul, when I paint this next portrait

Let it be you who wrecks the canvas.”

He had gone back to the sea for his subject.

Imagine a painter crucified by his subject!

Too exhausted even to lift his brush,

He provoked some artists leaning from the buildings

To malicious mirth: “We haven’t a prayer

Now, of putting ourselves on canvas,

Or getting the sea to sit for a portrait!”

Others declared it a self-portrait.

Finally all indications of a subject

Began to fade, leaving the canvas

Perfectly white. He put down the brush.

At once a howl, that was also a prayer,

Arose from the overcrowded buildings.

They tossed him, the portrait, from the tallest of the buildings;

And the sea devoured the canvas and the brush

As though his subject had decided to remain a prayer.

Note: The painting above is the "Grand Illusion" by a contemporary greek painter, Juliano Kaglis /  “The Painter” is drawn from "The Mooring of Starting Out: The First Five Books of Poetry" (Ecco Press, 1997) 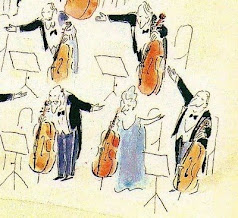 he said. In his rare moments of leisure, Jean-Jacques Sempé indulges his love of music. He once said that his 1979 collection, The Musicians – exceptional in the Sempé oeuvre for its unambiguous reverence, its tenderness uninflected by irony – was his favourite of all his books.  He says: "I did once want to become a musician, but when I saw how professional musicians lived, I decided to go on drawing. I also thought it might be interesting to become an editor, or to work in the theatre..." A smile flickers across his face; the Great Wit rallies. "My real dream was to be centre forward on the French football team, but I had to put those ambitions to rest last year. I realised that there was a conspiracy against me, and so now I draw." He shrugs. "Their loss."

Note: The sketch is drawn from Sempé's The Musicians. His words is an extract drawn from this article.

A journey up there,

I wonder if the moon

as the moon over Rome,

I wonder if it’s the same moon

or merely her sister…

for your head only!

As I journey up here,

I make light for all,

from India to Peru,

from the Tiber to the Dead Sea,

and my beams travel

(translated from the Italian by Virginia Jewiss)

First published in 1955, the Moon Over Kyiv, the tender poem above,  by the acclaimed italian children's author and journalist Gianni Rodari  is published again. This time  due to an initiative by publisher Einaudi Ragazzi and Beatrice Allemagna. "It was an awesome honor that they considered me" the italian illustrator and children's writer says. Maybe it was as a result of them having seen her very impressed by what is going on, in addition to knowing her love for Rodari, whose books she has already illustrated. "For me he is  a non secular father, there’s always a slightly little bit of him in my works" she says.

In the form of an e-book, or a conventional paper one, it will be out almost simultaneously in many countries worldwide. "I discovered that kids’s books are a social and political act (...)  I do not suppose there is a rise in manufacturing (books coping with warfare). I simply suppose they’re extra noticeable as a result of being within the highlight right now", she adds.

In Greece, where I live, "Το Φεγγάρι του Κιέβου" (translated by Antonis Papatheodoulou) is just published by Papadopoulos Books and the proceedings from the sales will be donated to  Médecins Sans Frontières / Doctors without Borders, thus supporting their work in Ukraine (take a look here).

"It is the original idea... 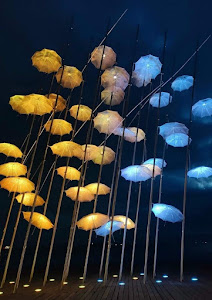 that is unique, not the object itself. "

Note: The "Umbrellas" is a signature artwork by George Zongolopoulos – a significant Greek sculptor, painter and architect. It is placed in Thessaloniki's new promenade, outside Macedonian Museum of Contemporary Art and this year, to show solidarity  and express sympathy to the Ukrainian people, the installation is  imbued with yellow and blue lights. It also turns out to be celebrating Ash Monday – the umbrellas resemble kites, in a still orbit though.