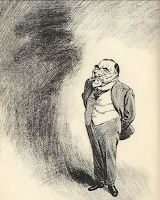 Morrell wrote: "I found Conrad himself standing at the door of the house ready to receive me.... [His] appearance was really that of a Polish nobleman. His manner was perfect, almost too elaborate; so nervous and sympathetic that every fibre of him seemed electric... He talked English with a strong accent, as if he tasted his words in his mouth before pronouncing them; but he talked extremely well, though he had always the talk and manner of a foreigner.... He was dressed very carefully in a blue double-breasted jacket. He talked... apparently with great freedom about his life – more ease and freedom indeed than an Englishman would have allowed himself. He spoke of the horrors of the Congo, from the moral and physical shock of which he said he had never recovered..."

Note: Lady Ottoline Morrell was an English aristocrat and socialite who befriended writers. He visited Józef Teodor Konrad Korzeniowski, aka Joseph Conrad, in August (or September) 1913 in his home in London, and the above is an extract of her impression on the Polish-British author. / The caricature is sketched by David Low in 1923.
at December 03, 2017