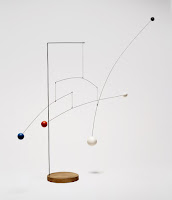 I've seen the nations rise & fall
I've heard their stories, heard them all
But love's the only engine
Of survival

Note: The above installation is called Untitled (1935) is representative of Calder’s floor- and pedestal-based mobiles made in the early 1930s. Here, Calder uses wood, a material that had been absent from his work since the previous decade, in combination with wire and string. Five painted wood orbs, varying in size, are organized in a spatial arrangement of counterbalance and organic movement. Calder later referred to these works as “Universes.” (via 1, 2)
at November 11, 2016