A garden in the dark

"We didn’t see it coming". A comment stunned people say in the unexpected aftermath of their actions. Also, the title of a novel for children and early teens (Alice Jeunesse, 2012) which deals with the consequences of the governance of a totalitarian party to people's lives. The novel comprises of seven chapters, each of which was written by a different author and it is about the life of a different family right after the election of a super-conservative party. All seven families, however, suffer the same from this party's extremism and their lives interweave as the plot unfolds in France, in the near future which, under the circumstances, is much nearer and more relevant to the present than anyone could have ever imagined.

The novel begins on the night of the elections. In the first story, the French writer Anne-Gaëlle Balpe monitors the Darsines who are anxious about the voting results. At the same time, their son Hector wonders why his parents do not like Walid, his immigrant friend, and why Walid's family stay indoors while everyone else has gone out in the streets to celebrate the victory of the Liberation Party.

In "Water and Salt", Clémentine Beauvais describes how the Miquelon family experience the implementation of The Rules – a set of unfair, rigid instructions about everything for everyone to follow. That's why they decide to leave their home - they take grandma's old sailing boat and sail around the world hoping to find some less horrible place to live in than the one they left.

Unlike the Miquelons, Walid's family stay behind and live in fear. In "All shades" by Sandrine Beau,  Walid's mother is constantly in a state of panic – not only is she afraid she might forget some rule of all those required by the Party (i.e. specific time for breakfast, specific food to eat, specific colour for your clothes, specific routine to exercise right after you wake up, etc), but she is also afraid of the colour bar – a chart of skin tones ranging from white to black. Of the eight shades included, only three are permitted – white, off-white and beige. Citizens who are classified in all the other skin-tone categories (caramel, light brown, medium brown, dark brown and black) are registered and displaced. No wonder, therefore, why Maroussia is so scared - she herself, Walid, Samia (Walid's sister) and their father have a caramel complexion.

"Hell in the making" by Agnès Laroche is the story of young Simon Nozen who has lost his leg and every mood for life. His parents try to light up his spirits but in vain. Until he receives a letter from the Ministry of Physical and Mental Health which dictates Simon present himself in the "Esar", a special care institute where "he will be subjected to appropriate treatment and he will live according to his abilities." Only then, Simon will force himself to wear the prosthesis and suffer the pain silently so that the entire family can pass unnoticed through the checking guards at the border and take refuge in their relatives' home in another country.

Summer passes by and in the "A smile on the edge of the lips" by Séverine Vidal, Marcus returns to school where all children wear uniforms in different shades of green which depends on... Nobody really knows exactly why they are separated like this. Along with Armand, his friend, they make fun of the situation and they get arrested for it. Headmaster Darsine, Hector's father, grants them a day of detention in the Room (a dark room where you are not allowed to speak) because both children,  within 30 minutes, infringed eleven rules of the Great Bible of Liberation.

Things are much more serious than a mere detention for Kedan, the protagonist of the sixth story. In the "Hard face of the earth" by Fanny Robin, his two dads –Bertrand and Fred– are beaten and, shortly after, arrested. That night, to save himself, Kedan runs away from home. While on the run, he witnesses his music teacher, Mr. Eten snitching "a whole long list" of people to a man in a black raincoat. Simon's name is in it. He starts running –again– and heads to alert his friend. The baker's wife will stop him and hide him in her car so the guards walking nearby won't spot him.

The novel spans four months during which period fear and control raids transform citizens – they now feel powerless and miserable and far from being free. Some of them, however, begin to react: Jose Sanchez, Walid's father who used to work as a clown before the elections, uses his make-up suitcase and changes Maroussia's complexion to a lighter tone so she gets the approval of the National Ministry of Origins. Walid and his sister, Samia, turn all the colorimeters in the area upside down in one night,  and Padre, Mark's father, covers his drums with blankets and goes on to rehearse his alternative rock songs with his band – Old-Roger, the singer, and Ben, the guitarist. These three, in the basement of Padre's house, form the first –small, soundless and quite sad– resistance core to the Party.

The second one, however, would be sonorous and melodious. In the last story, "The Last Song" by Annelise Heurtier, Sasha tries to convince people to rebuild their choir. Old Mme Popontiss and Mr. Alain are the first participants while Ms. Sanchez is not very willing because of the colour bar. Young Alice, however, invites them all to the underground shelter of her house so that they can sing freely without the sonars tracing them. Obviously, History repeats itself in the positive fields, too: "... only this can save us: a little courage from everyone."

The adventures of the seven families were, I suppose, a writing adventure, too. However, the result is cohesive as the seven authors achieved one coherent writing style. The narration is always from each child's perspective and the escalation of the plot follows a fast, teenage-like pace. The transition from one situation to the next is smooth and it creates a certain element of intimacy that permeates the text and engages the young readers with a fictitious yet familiar setting – the seven families live close to each other, the parents talk and exchange visits, the children go to the same school, play together and fall in love without being ostracized by their religion, skin color, age, parents' job or financial status. After the elections and the victory of the Liberation Party, however, the fictional frame of the novel is shifted to the edges of non-fiction. A genre that we, as adults, know that is not the work of an author's imagination – such illiberal acts as the ones described in the book (the dispersion of fear and the imposing of uniformity in appearance; the censorship and the strictly disciplined behavior; the superiority of the white race and the "de-worming" of society from immigrants; the persecution and inclusion of people with disabilities, the collaboration), have all been very very real some decades ago.

The book is a fascinating and touching read, aimed for 11 year-old children. Older readers will equally enjoy it as the ideas and concepts of the book are given through witty dialogues. All seven authors follow the rule of modern pedagogy that stands for a simple and timely language, open narratives and active thinking to external stimuli. In this sense, I found the title of the Greek translation of the book more suitable - it reads "How did we get here?" and it makes young readers be inquisitive, observant and critical about  the causes of each family incident while trying to find the answer to the title question.

However, since politics is not an easy matter to comprehend, at any age, I would recommend the presence of a parent or teacher (grandparents would be ideal) who can share their experiences of the past and discuss reactions/opinions with each young reader so as to illustrate policies and arbitrariness and make clear connections with real world situations – the direct affinities from the rise of the extreme right everywhere cannot be left to mere imagination or hypotheses.

For this, author and activist Stéphane Hessel, in the preface of the book, outlines how the seven short stories interact with the real world and what can actually happen if you are not alert  –  we are, you see, prone to recurrence so, we need to constantly work on our democracy. "From today on you have the power to say no to what does not seem right, to be indignant about what outrages you, to encounter critically what you read and what is shown on television. Have an opinion. You can share it with friends, parents, your teachers. (...) It is never too early to stand up for it." 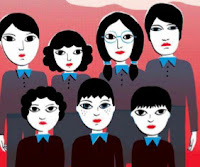 This versatile book (in terms of the number of authors and profiles of the protagonists) awakens the  political consciousness in young readers and sensitizes them to both the political extremities and the sense of personal responsibility – voting is not other people's business and its impact affects us all. Esp. young people; as the ones who were sitting next to a friend of mine in a Washington restaurant – few days after the presidential elections, they were complaining (in fact, my friend used the word "winning") about Trump, Gingrich, Jeff Sessions and the rest of the happy American few. My friend heard them -their discussions were in quite a vivid tone- saying they were supporting Bernie Sanders but they had not actually voted in the second round...

I wish these people had read this book, or any other similar one but apparently, they hadn't. I am afraid you can't either as the book is not translated in English. You can only find it in French and Greek. If you speak either of these languages, the reading of this book is more than rewarding. It's a staple.

Notes: The first picture is a detail from the Greek edition of the book and the last from the French one. The two paintings in between form one artwork – "The Audience: A Cast of 24"  by Peter Greenaway.
at November 29, 2016