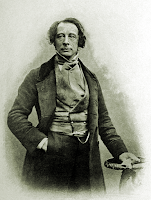 ...of serialised fiction, most of Dickens's major novels were first written in monthly or weekly instalments in journals such as Master Humphrey's Clock and Household Words, later reprinted in book form. These instalments made the stories affordable and accessible, and the series of regular cliffhangers made each new episode widely anticipated. When The Old Curiosity Shop was being serialised, American fans waited at the docks in New York harbor, shouting out to the crew of an incoming British ship: "Is little Nell dead?" Dickens's talent was to incorporate this episodic writing style but still end up with a coherent novel at the end.

The Old Curiosity Shop was printed in book form in 1841. Queen Victoria read the novel in 1841 and found it "very interesting and cleverly written".

Note: the photograph above is in fact a daguerreotype portrait of the author and was taken by Antoine Claudet  in about 1852.
at February 07, 2020