For Jonathan Coe's faithful readers, "The rain before it falls", must have been something like a shock: not only is it absolutely non-political but also, there are only female characters. Without being one (faithful reader), I really like his coruscating style and as soon as I read that he gave in to the challenge of writing a novel against his usual specialities, reading it was a one-way choice for me.

Gill inherits part of her aunt's property and is appointed to execute her will. That means to deliver a packet of four cassette tapes to a distant relative she does not really know, Imogen. The cassette tapes go with twenty photographs, mostly black-and-white. They are the ones that old Rosamond describes on tape up until the very night she died, wanting  Imogen to find out the truth about her past. Gill tries repeatedly to get in touch with Imogen but in vain. So, along with her daughters they, themselves, listen to the tapes.

It all starts from Shropshire. In the autumn of 1940, with the imminent WWII to break out, little Rosamond is evacuated from Birmingham and hosted to her aunt's house in the country. There she meets her older cousin, Beatrix –Imogen's grandmother– and the two girls grow very fond of each other, like being sisters. Rosamond witnesses how cruel her aunt, Ivy, is to her daughter – not yelling, just saying terrible things in a low voice. Beatrix becomes invisible to her mother and hides every emotional need a girl of her age has. Later, as a woman, Beatrix would try to fullfil those needs with love and attention from men but all she does is falling, repeatedly, for the wrong ones. In the process, she gives birth to a baby girl, Thea, which she will later abandon to Rosamond so she could follow Martin. That's in the middle of the 50s, Thea is nine and Rosamond now lives and works in London where she is having her first true love with Rebecca. The three of them will go away on a family vacation in France where, the motherly Rosamond will try to heal Thea's psychological wounds. Beatrix, however, will return two years later and reclaim Thea, insulting at the same time Rosamond and her relationship with Rebecca. The latter two will, eventually, separate after that and Rosamond will go on living in her usual quiet mode until she meets her second companion, Ruth.

The next time Rosamond meets Thea is on Christmas 1969 (I think). The family reunion takes place in the old family house and Thea, already an adult, is able to speak up. She says that Beatrix has changed her name to Annie and is now working in Canada as a nurse, being very popular in her field. She has not stopped, however, behaving despicably to both her (Thea) and the new family she now has with her second husband. In years to come, Thea will not be able to "deactivate" her mother's legacy and, as a result, she reproduces it on her own daughter, Imogen.

Dealing with how parents pass down their life experiences to their children is a challenging theme. It being the core of his novel, Coe  does handle it with great dexterity as he reveals the subcutaneous way that a mother imposes her whims and notions on her daughter through generations – from Ivy to Thea, every woman becomes self-destructive and abuses the next. Imogen has probably escaped this violent cycle when the Court appointed her to a host family after a violent outburst of Thea left her blind. She was not even four, at the time. This is why Rosamond records her voice – she wants to give her a sense of her true identity and help her understand; to show her that despite everything she is a good person. What's equally important, and well structured, is that the author examines the female emotional nature in depth and in most forms and levels: affinity, friendship, companionship, love. They are all portrayed through a combination of sharp observation and tenderness which makes  the female psyche transparent and the reading appealing.

Most of the story is told by Rosamond who describes on tape her family's history with the passing of time – from Shropshire in the 40s to London during the 50s, the 60s, the 70s and the 80s, and then back to Shropshire. There is only one, central, chapter in the book that interrupts this linear structure only to give some background story. There is no wild plot nor any unusual technique that would be challenging for the reader. Yet, the story is so masterfully written that I kept wondering why, on earth, I was so eager to read something so flat a piece.

With this seemingly downbeat but potent novel, Jonathan Coe takes many stereotypes down without resorting to melodramatic gimmicks although he could have done so – Rosamond's homosexuality is an advantageous point. Instead, he stays firm to the facts of life and reproduces the exact conditions homosexuals lived in the 50s and 60s. There is a touch of sentimentality in parts but his language is mostly simple, direct yet, chilling esp. when he talks about the inescapable legacy. A pinch of humour here,  a slight bit of phlegm there, just to cover up sadness, but nowhere a place for Coe's biting satire. As the author himself said, the time had come to cut jokes off and become serious. This change, however, did not deprive the novel of anything. On the contrary. The complexity of the personal relationships developed makes the characters believable and completely familiar. With sad but fervent hues, Rosamond's story is staggering and her voice, through the recordings, quite imposing. You feel like you are actually listening to her warm voice, full of discretion and truthfulness. You even expect her to offer you one of those little alcoholic refreshments she takes when there is a pause. 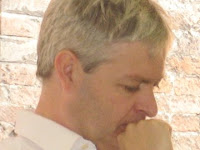 There are also two more understated points I loved noticing. Firstly, the author raises nice questions on how words can truly represent something visual and how a picture is not always what it seems. "Everybody smiles for photographs," Rosamond tells us. "That's one of the reasons you should never trust them." And that he does allow, after all, room for politics. In fact, "What could be more political that the dynamics developed within a family? Or, the tyranny exercised from a parent on a powerless child?"  the author asks.  The  lively reconstruction of society in postwar Britain, reaching the present days, leaves enough room for other political comments, too.

A novel in point.

Notes: This is Jonathan Coe's eighth novel and is translated in Greek by Margarita Zachariadou (Polis Editions, 2007).  His latest one, Middle England, is out in November 2018. / The installation in the first picture is  the acclaimed Umbrellas by G. Zongolopoulos. / This article was originally published in Greek and has now been reviewed.
at July 08, 2018