A Classic in the Summer 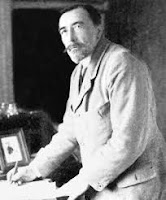 It's like an indispensable need – reading a classic in the summer seems to counterbalance the indolence of the season. Joseph Conrad's "A Personal Record" could not have been a better choice.

There's a light, but not in any way frivolous, temper in Conrad's revealing his thoughts when he narrates certain instances about his family, his adolescence and education in Poland (or Ukraine), then part of the Russian Empire; when he recalls his first barque in Marseille, his travels in Africa and the great influence uncle Tadeusz had on him; when he confesses the reasons that led him to pivotal decisions in his life, including his choosing the English language as his main one - how completely understandable! His comments on the writing process, literary criticism and the human nature are quite insightful and appealing.

It is considered unreliable and digressive in structure, this diary however is the only formal account of the author's life. It revives the period between the Napoleon era and 1895 (the year he wrote "The madness of Almagier") and the extensive commentary section at the last pages gives a lot of explanatory details that clarify precisely how this time in History interrelates with the author's family.  In that sense, it can be considered as a historical and political record, too.

The Greek edition (translated by N. Dinopoulou, A.Koutsou - Printa, 2000) includes two editorials – the ones Joseph Conrad wrote himself initially to accompany the two different versions of the "Record" in English and that is something that adds interest to the book. However, I cannot say the same for the appendix by Nobel laureate Czeslaw Milosz where he thoroughly analyzes the life and poetry of Conrad's father – unless it is included for encyclopedic purposes only, it does not contribute to the understanding of Conrad's authorship.

Worth reading, in any case.